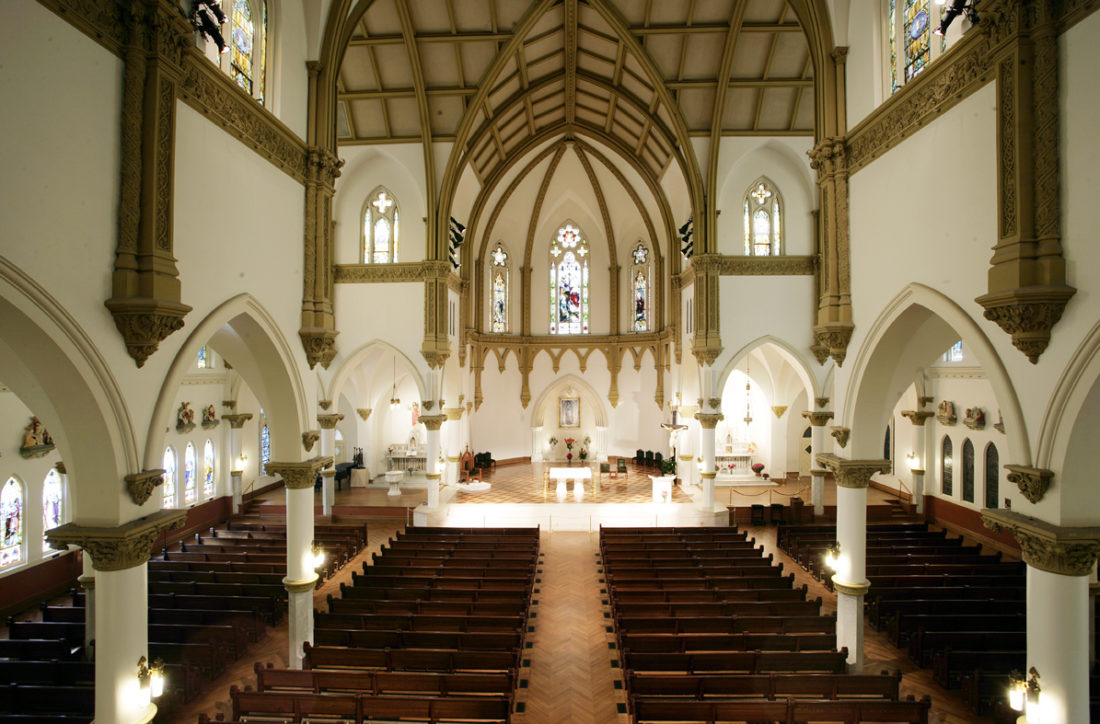 Stanton Studios is currently undertaking a massive restoration project with some great partners to help us out! Landmark Construction, as well as Mominee Studios are partnering with us on this great project. Tune in and find out the significance of the church we’re working on and the jobs of each of our teams!

The Cathedral, well known for its high ceilings and beautiful stained glass pieces, is also a very notable church in the Dallas area due to the fact that it’s the cathedral church of the Roman Catholic Diocese. According to a the cathedral’s website, “The church oversees the second largest Catholic Church membership in the United States and its average Sunday attendance is 11,200.”

The Cathedral also has in interesting connection to renowned architect, Nicholas J Clayton, who was considered a premier architect of the 19th Century in Texas! According to Texas.com, “The cathedral was created in the High Victorian Gothic style and has details such as Victorian snowflake stenciling along the ceiling.” Though Clayton was responsible for designing and constructing several more churches in Galveston as well as several other residences and buildings, the Cathedral Shrine of the Virgin Guadalupe is the last of Clayton’s works left standing in the city.

Stanton Studios and Mominee Studios are working together to restore the numerous stained glass windows in the cathedral to their former glory, and Landmark Construction is working on taking out the windows and re-creating the frames so they can re-install them. Each frame is made custom to each window, and each window is made up of hundreds of pieces of glass that will need to be taken apart and cleaned by Stanton and Mominee Studios. This massive job is going to take a lot of team effort and we’re excited to see this project’s progress.

Approximately how many windows are in the church?

There are about 200 panels of stained glass windows in this church. The large and beautiful church is rich with painted window art and stained glass due to the fact that the church is the Roman Catholic Diocese and is made to fit a large congregation. There are 12 large stained glass pieces of art on each side of the church that shows an image of one of Jesus’ disciples in each window. Located above this are the Stations of the Cross, and scattered throughout the rest of the church, there are stained glass images of the saints. There is a prayer guide for each window and for each station and the windows help the priest and the congregation to visualize the saints, the disciples, and the other stories of the bible as they pray.

What goes in to the process of removing and restoring windows?

Though some of the windows are located in easy to reach places, some of the windows are high up at the top of the church, in the clerestory. This requires the Landmark Construction team to use cranes and special equipment to get their men up to the top of the high ceilinged church and carefully remove the fragile glass. Because the stained glass windows have been hanging in the church for so long and have weathered so many storms, there are pieces that have been shattered and broken, and it is imperative that the Landmark team tries to get the window out as intact as possible.

Once Landmark Construction has taken the windows out, Stanton Studios and Mominee Studios pick up the windows and take them back to their respective shops. Stanton Studios begins the restoration process by taking the old frame off of the window and carefully removing the lead to release the individual glass pieces. Then the individual pieces are soaked and cleaned. Any broken pieces are either replaced or glued back together and then the window is leaded and soldered back together with new lead. The windows are then waterproofed and the lead is buffed. After this, the window can be returned back to Guadalupe Cathedral so it can be re-installed.

This process will be repeated over and over until all of the church’s windows have been taken out, restored, and reinstalled.

What is going to be the most difficult part of the project?

Even though this entire project is a feat in itself just due to the sheer number of windows in the church, there are a few windows in particular that may be more of an issue than the rest. Though Stanton Studios, Mominee Studios, and Landmark Construction are fantastic in their fields, their jobs become significantly more difficult when some of the windows are out of reach. Some of the windows that are in need of restoration for this church are behind the extremely large pipe organ, located in the back of the church in the choir loft. In order to reach these windows, the pipe organ will have to be disassembled pipe by pipe so the windows can be pulled out, restored, and reinstalled. After this, the organ will have to be reconstructed and re-tuned, pipe by pipe. Talk about a lot of work!

Interesting fact about the windows:

We are excited to be working on restoring stained glass windows for such a beautiful and important Catholic church and we are so happy to be working with such great team members at Landmark Construction and Mominee Studios. Though the process is long and tedious, the finished restoration of all of the windows will really make the church like new again. To follow our progress on this project, follow us on social media or tune in to our newsletters.