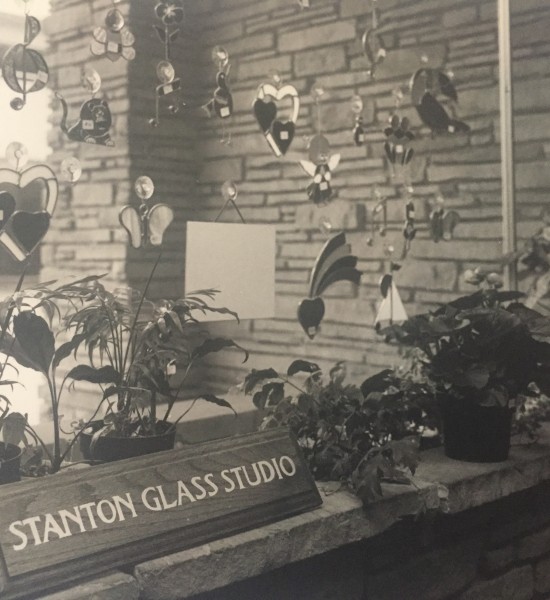 Have you ever wondered how Stanton Studios came into existence? Join me as I explain how Bryant Stanton learned his trade, started his business, and then passed on his knowledge to his children! Learn how the business flourished and how things changed as times changed.

How It All Began: Mr. Stanton’s journey to starting the studio

Bryant Stanton began his journey into the world of art when he was a young adult in high school. It all started when he did a research paper on a Gothic Cathedral, and he became fascinated with the stained glass and window bays used in the cathedral. When Bryant went to Texas Tech and transferred to Baylor, he studied 3-Dimensional Studio Art and found that he incorporated glass wherever possible in all of his art projects. But Bryant didn’t begin pursuing his passion until a fateful event occurred. It was when he took a walk off campus that he came across an old stained glass shop and met a man who changed his life. Bryant described the man being an older man with a ponytail and a beard and the man was building a stained glass window. This man offered to teach Bryant, and that is where Bryant made his first sun-catcher, a butterfly. After this, he says he was “instantly hooked.” Because Bryant was so passionate about making stained glass, he accepted a full time job at The Warehouse working for Homer Owen, and made inspirational gifts for him. Bryant created sun-catchers with bible verses on them. After he got his start, Mr. Stanton began his own business in a shop in downtown Waco, and started calling churches and businesses and advertising his services. He received his first restoration job fixing up windows for Central Christian Church, and his first new piece he created was a pelican stained glass for Pelican’s landing.

Incorporating the Stanton Family: Passing on the Skill

After Bryant had his first child, a daughter named Tiffany, he began to teach her the ways of the shop and how to handle glass. Soon after, Nathan and Jordan, the eldest sons, began learning their father’s trade. Jordan was “a little clone of his father” and he quickly picked up the skills needed for creating glass and became assistant manager and accompanied his father to meetings. However, Nathan, the eldest son, found that working with glass was not his passion and went off on his own and learned his own trade: woodworking. Though Bryant was responsible for teaching Tiffany, Nathan, and Jordan how to do glass working, Tiffany was responsible for teaching her younger sibling, Samuel to work with glass when he joined the shop as a grouter. As time passed and all of Bryant’s children grew older, things around the shop began to change. Bryant hired an in house painter, Joe Barbieri, and Bryant’s wife, Suzanne Stanton, eventually became the bookkeeper and Jordan became the official manager. Samuel also moved up from being a grouter in the shop to being a builder. Also, Tim, the youngest son, joined the shop as a builder, and Nathan helped to expand Stanton Glass Studio into Stanton Studios as he brought his woodworking abilities to the shop.

All of Bryant’s sons started learning glass-working by the time they were seven. The children began in a similar way that Bryant did and they had made dream catchers when they were young. By the time that they started officially helping out in the shop at around age 16, they were very well taught and had years of experience with glass. Each member of the family has continued in their current roles and has mastered their duties in the shop.

Expanding Their Skill: From Simple Projects to Complex Masterpieces

Since he first started the business, Bryant worked tirelessly, designing and creating works in glass. His knowledge and experience that he gained has allowed him to complete iconic works that are not only breath-taking, but a magnificent feat to design and build. Now that Bryant has honed his skills, he and his sons are able to tackle projects that range from stained glass for residences or businesses, to huge sculptures for universities or giant glass domes for hotels. Bryant expressed that he most enjoys projects that are big and challenging. Some of his most memorable works are the 3 story long DNA sculpture that hangs suspended in a stairwell in the McLennan Community College Sciences Building, the iconic dome of the Driskill Hotel, and we are currently restoring a priceless stained glass Louis Comfort Tiffany window for Galveston Church.

Stanton Studios has really come a long way from that first butterfly sun catcher, and Bryant and his sons are always learning more and continuing to find new challenges in creating the most beautiful pieces. Due to their success in their field, Bryant has been able to serve on several community boards, including serving on the Waco Chamber of Commerce, the Waco Art Center, the Stained Glass Association of America, and also serves as the Editorial Chair of the Stained Glass Quarterly Magazine.

Plans for the Future

As Stanton Studios continues to hire more builders and expand, it is Mr. Stanton’s hope that the business will live on through his sons, who now are in charge of teaching the new hires the skills involved with stained glass making. The knowledge of how to handle the processes involved with stained glass is passed down from person to person. Once one person learns, they become a teacher to the newer workers in the shop.

In the future, it the hope of the Stanton family that their business will continue to flourish and evolve into an even more successful model of what Bryant has created. Samuel anticipates taking over for his father one day as a designer and Jordan will most likely take over the business aspect of the shop. Nathan’s wood shop is currently undergoing an expansion remodel in an effort to house many more woodworking pieces in the future.

We are so thankful that Stanton Studios has had such an interesting start and an unusually rapid rate of success and we hope that this trend will continue on into the future generations of the shop! The Stantons have attracted a lot of attention with their beautiful pieces and have been featured in several magazines and newspapers over the years, quenching people’s curiosity as to how they got started in such a unique niche. However, now that they’ve been established, and with the Stanton sons continually learning and expanding their knowledge in their craft, the information that will be passed on generationally will include dozens of great methods to handle glass and even more fantastic masterpieces! We can’t wait to see what other projects Stanton Studios will produce next.